PEI recently completed the structural evaluation of the CH-53 Maintenance Trainer (MT) for Kratos Training Solutions.  The CH-53 MT is unique in that the tail assembly is hinged and swings 175 degrees from the flight orientation, placing the entire tail load on two fittings instead of four for flight.  PEI performed the structural analysis of the trainer with the tail in the flight, 90 degree, and 175 degree orientations to ensure that all structural requirements were met.  PEI worked closely with Kratos to ensure the design was sufficient for all training environments. 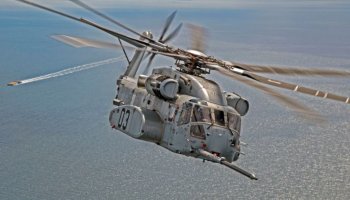 PEI was awarded a contract by American Systems to perform the design and structural analysis of the Low-Speed Precision Control (LSPC) modification to the CH-53E Super Stallion for the United States Marine Corps. Among its many functions, the LSPC will allow the heavy-lift helicopter to land safely in a degraded visual environment (DVE), especially at night.

PEI is working on year two of a five-year support contract for the Department of Commerce, NOAA Aircraft Operation Center in Lakeland, FL. Under the current contract, eleven (11) task orders have been issued and seven (7) of those task orders have been completed. PEI supports modifications to several NOAA aircraft including the Lockheed WP-3D Orion, de Havilland DHC-6-300 Twin Otter, Gulfstream IV-SP, and Beechcraft King Air 350CER.

PEI completed the analysis and design of fuselage modifications to the WP-3D aircraft. The fuselage reinforcements were required because a new rack system with significantly heavier payload capacity (also designed and analyzed by PEI) was installed. The work required several site surveys to reverse-engineer the aircraft structure, as documentation on the aircraft is incomplete. Another completed task order was the structural analysis and approval of the Turnkey Airborne Gravity System (TAGS) in the King Air.

PEI continues to provide engineering support for the Bell 525 Odyssey Simulator including structural analysis, finite element modeling, and interface design. PEI evaluated alternative visual display solutions for the trainer, and also investigated the use of different materials for the support structures.  The Odyssey Simulator design allows for the reconfiguration of the trainer aircraft within a few hours.  The removable module that is interchanged includes the cockpit, control frame, and instructor station.